In jail, it calmed down troublesome prisoners 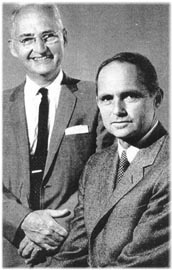 Pyschiatrist William Turner, with Jack Dreyfus (right), has directed DPH research for the Dreyfus medical foundation since it was established in 1965.

The neurophysiologist told Dreyfus there was nothing absurd or illogical about his ideas and gave him a standard textbook of pharmacology—Goodman and Gilman’s The Pharmacological Basis of Therapeutics. Dreyfus began to read about DPH and his interest fastened almost instantly on an item which, in the textbook, was merely an incidental observation about the effects of DPH on epileptics. “Salutary effects of the drug,” it said, “on personality, memory, mood, cooperativeness, emotional stability, amenability to discipline, etc. are also observed, sometimes independently of seizure control.” He read the passage again. So these other effects of DPH had been noticed. Since they had, and since DPH had been on the market for nearly 30 years, why had no one used it on non-epilepties? Could it be a trick of semantics, one of those instances where, because something is labeled “anticonvulsant,” no one tries it for anything except convulsions? Or might others have tried it, with the results buried somewhere in obscure technical journals?

His early inquiries led him to Dr. William Turner, a psychiatrist of impeccable repute who, at the Central Islip (N.Y.) State Hospital, had already been using DPH to a limited extent on non-epileptic patients. Dreyfus asked Dr. Turner if it would make sense to start financing more extensive research on DPH. Turner felt he knew too little to give Dreyfus a definite answer. But he was sufficiently intrigued to initiate clinical trials with a group of emotionally disturbed patients. Results were gratifying enough to enable Turner to encourage Dreyfus—who proceeded to set up a medical foundation devoted to exploring the benefits, if any, of DPH. Dr. Turner became its director.

One of the foundation’s earliest projects was undertaken at the Worcester (Mass.) County Jail by Dr. Oscar Resnick of the Worcester Foundation for Experimental Biology. Resnick permitted Dreyfus to participate personally, both in choosing the first group of volunteer subjects and in interviewing them. The prisoners selected were all troublesome types serving time for various crimes of violence. They felt angry most of the time, were quick to take offense and to fight. Fear often accompanied the anger and each of them was afflicted with a “nonstop” mind. “They thought and thought, and brooded and brooded, and were preoccupied and obsessed,” says Dreyfus. “Many of them would get on one thought and work it over and over. Others would be besieged by a great many thoughts at the same time, causing confusion. They all had great difficulty concentrating.” At first, all the volunteers got. DPH for several days, and the guards could hardly believe the spectacular changes in disposition and behavior. The next test was “double-blind”—that is, some of the volunteers got DPH and the others harmless placebo capsules. Only the pharmacist who made them up knew which was which. The prisoners on DPH maintained their pleasanter personalities, while those on the placebo relapsed into their former state of troubled belligerence. The ones who remained in the happier mood did not become placid. They still were capable of anger, but it required some reasonable provocation—and they developed what one called “a set of brakes” which kept them from reacting instantly, without thinking, to their anger. Also, their concentration improved; random thoughts no longer reeled uncontrollably in their minds.

Dreyfus couldn’t help wondering how the course of these people’s lives might have differed if DPH had been available to them earlier. When the jail study was over, Dr. Resnick carried out another group of tests, again on a small scale, this time at a school for delinquent teenagers in Massachusetts. The results were equally impressive. And there was one unpredictable outcome of these studies—their effect on Resnick himself. For years he had slept poorly. He ate too much and weighed too much. He smoked incessantly, had bouts of depression, was often edgy and irritable, and felt himself to he a rather difficult man to live and work with. In his years of conducting studies on the effects of nearly every known psychochemical, from anti-depressants to tranquilizers to LSD, he had never been tempted to try any himself. Now, after seeing the results of DPH therapy, he decided to take it himself. On DPH he quit smoking, began to sleep better, lost 50 pounds in a few months, and was soon getting an embarrassing number of unsolicited compliments from his family, his friends and his associates on the marked improvement in his disposition.

The Turner and Resnick studies constituted only the beginning of scientific proof, Dreyfus knew, and they did not deal with large, definitive quantities of subjects. He knew, too, that his personal observations of the people he had helped by suggesting the drug would not be recognized as scientific. Yet it was enough to convince Dreyfus rivately of the positive value of DPH. “I remember thinking: Well, it is possible that all these beneficial effects could be coincidental, or due to something other than DPH. It is possible. But the odds against it are pretty overwhelming.” Through the new research foundation, Turner and Dreyfus organized new projects, including one in Chichester, England, under Dr. Lionel Haward at Graylingwell Hospital. They also continued to learn about and contact other scientists and physicians who had worked independently with DPH—among them Dr. Walter Alvarez, syndicated medical columnist who for many years had been a consultant at the Mayo Clinic; Dr. Efrem Ramirez of the New York City Health Department, who had often used DPH on hard-to-handle addicts; Dr. Joel Elkes, professor of psychiatry at Johns Hopkins, who had given patients DPH in conjunction with other drugs; Dr. A. D. Jonas, director of the Institute for Theoretical Medicine in New York; and Dr. James E. P. Toman, head of pharmacology at the Chicago Medical School’s research institute.

Dreyfus worked hard and quietly to make these people aware of one another, and to isseminate to all of them any new information he turned up about DPH. As a result, a morning-long symposium took place last winter at the annual meeting of the prestigious American College of Neuropsychopharmacology. Chaired by Dr. Jonathan O. Cole of the National Institute of Mental Health, it was devoted exclusively to the benefits of DPH. Dreyfus was permitted to present his own paper called “The Beneficial Effects of Diphenylhydantoin on the Nervous Systems of Nonepitepties—as Experienced and Observed in Others by a Layman.” The proceedings of the symposium—which consolidated the new knowledge about DPH—are to be published shortly in a special supplement in the International Journal of Neuropsychiatry.